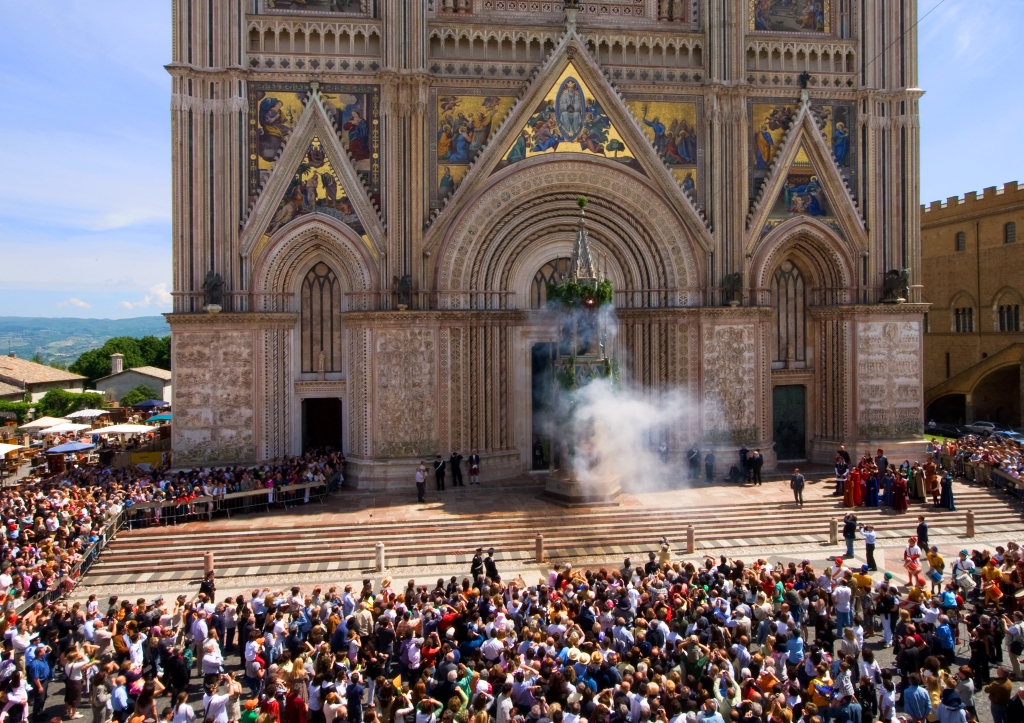 Processions in medieval costume and other festivities take place in Orvieto to celebrate the events that led to the building of the town’s cathedral. Celebrations also take place in other Umbrian towns, notably Spello.

The Feast of Corpus Christi in Orvieto

As every year on the Feast of Corpus Domini (Corpus Christi, Body of Christ, 2nd Sunday after Pentecost in Italy, 9th after Easter, ed), Orvieto relives the solemnity of the ceremony, both religious and purely popular. “To lead the dance” is the Corteo delle Dame (Ladies Parade), previous Saturday afternoon, about 16:30, which proposes an imagery glimpse of medieval life: the nobles of the ruled territories, arrived in the city to march in the parade, were followed by numerous ladies and courtiers. And in honor of the firsts the Podestà (Magistrate, the ancient Mayor) organized plays in the square, from Medieval dances to songs, from performances by flag-wavers to those by falconers, with the Palazzo del Popolo as framework.

But it would be ungenerous to reduce the strong bond between Orvieto, the Orvietani and the Feast of Corpus Christi to, albeit spectacular, historical and religious reenactments. In fact in this day is celebrated the miracle of the Sacramental Bread, the Eucharistic miracle of Bolsena. Tradition has it that in 1263 a Bohemian priest, Peter of Prague, going to Bolsena stopped to celebrate Mass at the altar of St. Cristina. The priest was plagued by doubts. He did not believe possible the transformation of the bread and wine into the body and blood of Christ. During the consecration a miracle occurred: blood gushed from the communion bread. The event was communicated to the Pope, Urbano (Urban) IV, who resided in Orvieto, who ordered the immediate transfer of the vestments worn by the priest, the Sacro Lino del Corporale, to the city of the Rupe. Still visible today to the faithful, contained in a Reliquary, during the Procession.
Urban IV, a year later, in 1264, extended the feast to the whole Catholic world.