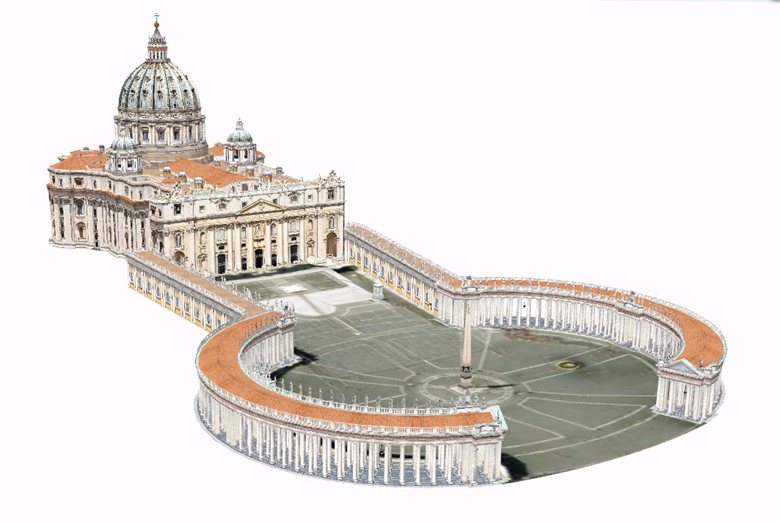 St Peter’s and other Roman basilicas in 3D

It is a cinematic tour which captures never-before-seen angles of Rome’s papal basilicas. Following the success of Vatican Museums 3D and of Florence andUffizi 3D, St Peter’s and the Papal Basilicas of Rome 3D is coming to theatres in Italy from 11 to 13 April and is set to premiere in more than 50 countries around the world. Produced by Sky and the Vatican Television Centre (CTV) and distributed by Nexo Digital, the film rediscovers some of the great treasures of the Eternal City on the occasion of the Jubilee of Mercy. It has been recognized by the Ministry of Cultural Heritage and Activities and Tourism and by the General Management of Cinema. Among the jewels of the film, which lasts 90 minutes, is its rare look at the Pietà by Michelangelo without the display case which usually covers it and the close-up shots of the dome of St Peter’s. It also gives viewers a unique look at each basilica without the crowds. Leading the audience on a fascinating journey which perfectly combines art and culture is the Director of the Vatican Museums,Antonio Paolucci (through St Peter’s Basilica); architect Paolo Portoghesi (through St John Lateran); art historian Claudio Strinati (through St Mary Major) and Micol Forti, Director of the Contemporary Art Collection of the Vatican Museums (through St Paul Outside-the-Walls). In an original and engaging manner, these experts describe the basilicas, explaining their transformation throughout the centuries. They also illustrate the works of art held in the basilicas and the salient features of the artists who produced them, including Giotto, Bramante,Michelangelo,Francesco Borromini, Gian Lorenzo Bernini, Domenico Fontana,Arnolfo di Cambio and Jacopo Torriti. The tour of the four basilicas begins with passages from “Passeggiate romane” written by French author Stendhal who traveled much throughout his life and, in the end chose, Italy as his final destination. At the beginning of the 19th century he visited and was enchanted by the four Roman basilicas during the traditional grand tour. Significantly, he noted that “Nothing in the world can be compared in St Peter’s”. Stendhal also witnessed the great fire of 1823 that destroyed much of St Paul Outside-the-Walls. Among the countries which will show the film are Mexico, Chile, Peru, Colombia, Canada, United Kingdom, Ireland, Spain, the Netherlands, Russia and Hong Kong.Using the powerful technical means of the most advanced film productions, the viewer is presented with astonishing images from helicopters and mechanical arms. And thanks to the power of 3D, the viewer is placed in the middle of the scene and in direct contact with the works of art. The film is also enriched with 3D reconstructions of the original designs, some of which are kept in the Vatican Apostolic Library, like Bernini’s St Peter’s Square and colonnade, as well as Borromini’s designs with original drawings of the nave of St John Lateran. In short, the vast arsenal of technology employed allows one to see and appreciate the hidden details of the various art treasures visited in the film. For example, it’s possible to read Michelangelo’s signature on the Pieta. Music also plays an important role in the narrative structure: alternating are original songs composed for the images and organ music played by Luca Biagi in St John Lateran. Biagi played exclusively for the film to accompany the Stendhal quotes, giving them an even more alluring inspiration.