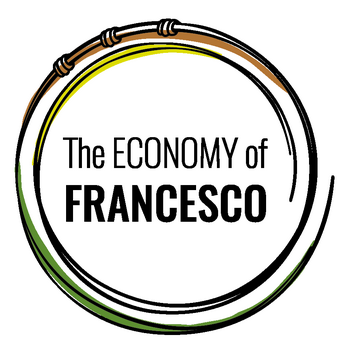 The Economy of Francesco

Vatican City, May 11, 2019 / 11:04 am (CNA).- Pope Francis has personally invited young economists and entrepreneurs to join him in Assisi, Italy, in 2020, to discuss how to bring the culture of life and care for the common good to the global economy.

In a letter published May 11, the pope extended an invitation to an “event that will allow me to encounter young men and women studying economics and interested in a different kind of economy: one that brings life not death, one that is inclusive and not exclusive, humane and not dehumanizing, one that cares for the environment and does not despoil it.”

“With you, and through you,” he said, “I will appeal to some of our best economists and entrepreneurs who are already working on the global level to create an economy consistent with these ideals. I am confident that they will respond.”

“And I am confident above all in you, young people, who are capable of dreaming and who are prepared to build, with the help of God, a more just and beautiful world.”

Called “Economy of Francesco,” the event is set to take place March 26-28, 2020, in Assisi, the hometown of St. Francis located in central Italy.

The pope said Assisi was chosen as the location because it is the place St. Francis left behind worldliness “in order to choose God as the compass of his life.”

St. Francis’ “decision to embrace poverty,” he continued, “also gave rise to a vision of economics that remains most timely. A vision that can give hope to our future and benefit not only the poorest of the poor, but our entire human family.”

According to Pope Francis, St. Francis of Assisi is an “outstanding example of care for the vulnerable and of an integral ecology.”

“I think of the words spoken to him from the Crucifix in the little church of San Damiano: ‘Go, Francis, repair my house, which, as you see, is falling into ruin.’ The repair of that house concerns all of us. It concerns the Church, society and the heart of each individual,” he stated.

In the face of an urgent need, Pope Francis encouraged people to rethink their “mental and moral priorities, to bring them into greater conformity with God’s commandments and the demands of the common good.”

In his letter, the pope also referenced his 2016 encyclical on the environment Laudato si, in which he emphasized the need for care of the environment to be connected to a concern for justice for the poor and answers to the structural problems of the global economy.

“We need to correct models of growth incapable of guaranteeing respect for the environment, openness to life, concern for the family, social equality, the dignity of workers and the rights of future generations,” he said, adding that he believes few have yet heard this appeal or worked to set into action an economic model based on fraternity.

The March 2020 event will be open to Catholics and to people “of good will” of any faith and of any nationality.

The event will promote “a common ‘covenant,’ a process of global change,” Francis said, through people “inspired by an ideal of fraternity attentive above all to the poor and excluded.”

“I await you and even now, I greet you and I give you my blessing,” he concluded the letter. “Please, do not forget to pray for me.”